For the honey syrup

For the whipped cream topping/pastry cream 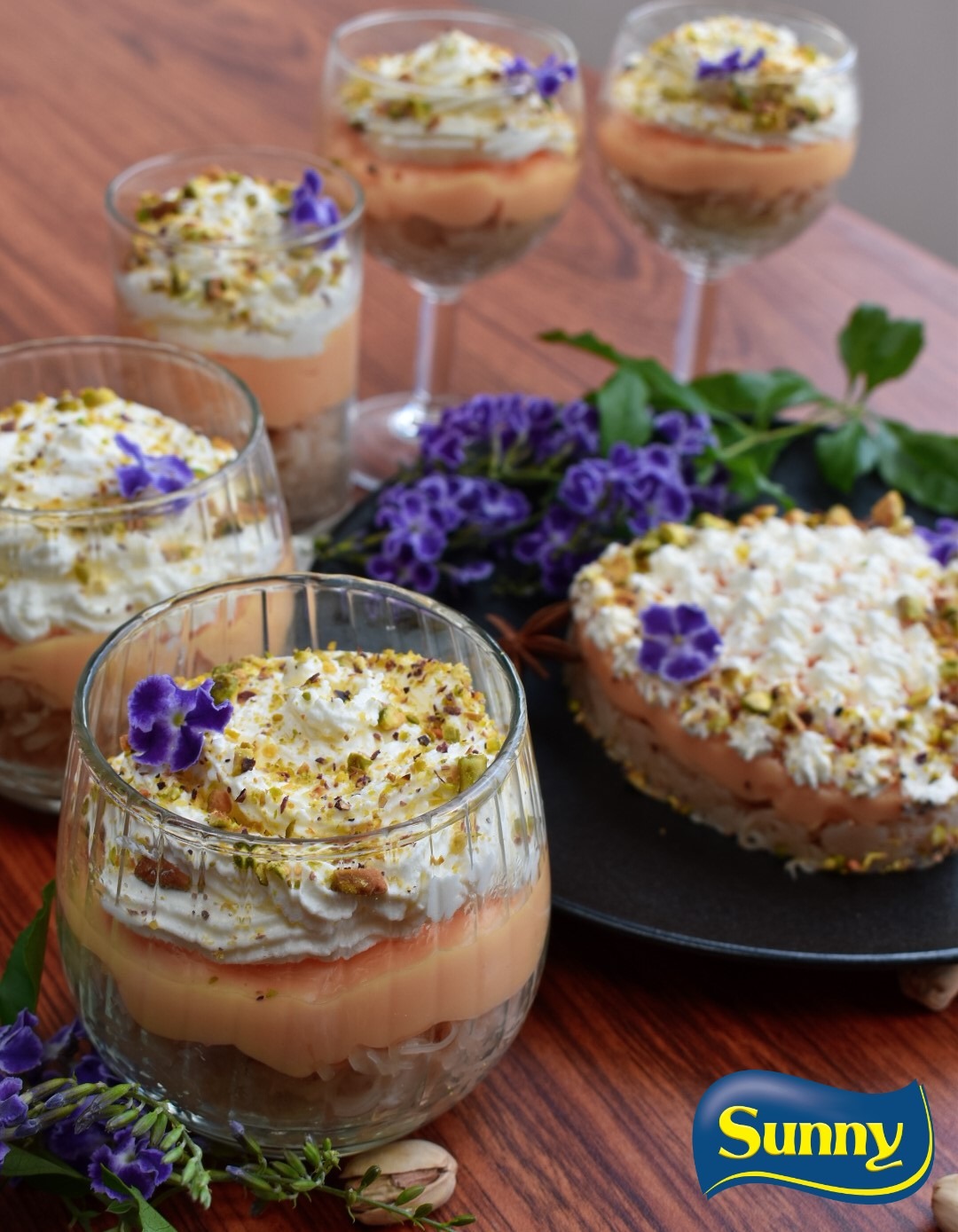 1. Put the water, sugar, cinnamon stick, lemon juice and peel in a saucepan and bring to a boil. Let it boil for 4-5 minutes. Remove and discard the lemon peel and the cinnamon stick.

2. Take it off the heat and stir in the honey. Set it aside to cool.

2. Add cinnamon, cardamoms, and almonds, stir and cook for 2 minutes.

3. Add the water and cook the mixture until boiling. Then add sugar and mix until all the sugar has melted.

4. Add the vermicelli and cook over low heat, stirring occasionally, until most of the liquid has evaporated and that the vermicellis are very soft.

5. Remove the cinnamon stick and pour this mixture into a buttered pan and let stand for a few hours.

6. Sprinkled with the desiccated coconut and almonds.

1. Put the milk, sugar, cornstarch, egg yoks, vanilla, salt, and ground mastic (if using) in a blender or food processor. Blend for about a minute.

2. Pour the egg mixture into a saucepan and cook over medium heat. Gradually bring to a boil, whisking continuously until it thickens, about 5-7 minutes. Don’t stop whisking as it can quickly burn. Once thickened, take it off the heat and whisk in the butter.

3. Pour the hot custard in a large, sheet pan and cover immediately with plastic wrap. Make sure the plastic wrap touches the entire surface.

4. Let the custard cool completely. It should take about 1-1½ hours.

1. Put a metal bowl in the freezer for about 10 minutes.

2. Take the metal bowl out of the freezer and add the cream, powdered sugar and vanilla.

3. Using a hand mixer, whip the cream until it thickens and forms peaks, about 5 minutes.

1. Add a layer of the syrup and vermicelli base to the bottom of a pan and even it out. (Use all of it if you’re making one large pan, or use half of it in a small pan and the rest in 6 individual dessert glasses).

2. Spread an even layer of the custard cream on top.

3. Spread the whipped cream on top.

4. Garnish with the chopped pistachios and then dust with cinnamon.

5. Refrigerate for about 1 hours before serving, to give it time to set and make it easier to cut.

6. Store any leftovers in the refrigerator for up to about 5 days, covered with plastic wrap.